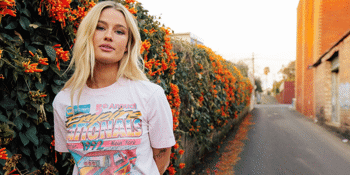 One Louder and Select Music presents

with Special Guests
Northcote Social Club (Northcote, VIC)
Saturday, 13 November 2021 9:00 pm
25 days away
18 Plus
Music
Australian Artists
Send this event to
Whilst many of us took up hobbies and just tried to get through lockdown, GRAACE was quietly undergoing a musical metamorphosis. Now, after a year of personal growth, this butterfly is ready to spread her wings. It’s time to watch her soar.

Following a year of deep self-reflection and discovery, GRAACE says that she no longer felt an affinity to the music she had been creating. It was in the stillness of lockdown that GRAACE returned to her honest songwriting roots.

Inspired to create, this Sydney based singer-songwriter journeyed back to her piano and acoustic guitar to unearth a brand-new project, being GRAACE’s upcoming EP ‘Self Preservation’. Forever anchored by heartfelt, goosebump-inducing lyrics that first won GRAACE a legion of global fans, the EP innately captures songs about grief, loss, and the journey in-between; and for the very first time, GRAACE pens the passing of her dad who she sadly lost at the age of 14.

The project is “literally the polar opposite to [debut EP] ‘Self-Sabotage’” GRAACE explains. “I think my growth in those three years was pretty immense emotionally. I love this EP so much because it's not just about heartbreak, I've finally been able to write about my father and things that are really, really personal.”

After losing her father at just 14 years old, GRAACE turned to music as a form of therapy. “It was the one thing that gave me purpose,” she recalls. “I struggle to speak up on things and I don't like confrontation. Music’s the one thing where I'm just brutally honest.”

“As someone who has dealt with death, it’s hard to sing about, but I personally love songs that are about loss. So, I thought, why don’t I do that for the people who have lost someone in their lives? In January, it'll be 10 years since I lost my father. I think it’s kind of beautiful to finally be able to write about it, to move on and grow.”

Having fallen back in love with her piano and guitar last year, GRAACE has enjoyed bringing a more natural, acoustic sound into her music. Now, GRAACE finally feels that she has found her true voice.

Namechecking Olivia Rodrigo and Phoebe Bridgers as key influences for the new project, GRAACE wants fans to feel like they’re listening to a diary entry when they hear her music.
The first single from the EP, “Sentimental”, is a raw and stripped-back number that lets GRAACE’s beautiful, breathy vocals take centre-stage. Set for release later this year, it marks a clean slate for the artist to begin her new chapter.

GRAACE’s breakthrough happened in 2017 when she co-wrote and featured on Hayden James’ platinum-selling electro-pop single “Numb”. GRAACE’s sparkling vocals intertwine seamlessly with the club-ready production, making it an instant hit. However, she reveals that “With Hayden James' production it's quite dancey, but when you strip it back, it's super sad. I pretty much wrote it without the production. One time I saw this chick literally bawling her eyes out at this festival and then right next to her, everyone's just fist-pumping and dancing. It was the weirdest contrast.”

Riding high from the success of “Numb”, in 2018 GRAACE released her ‘Self-Sabotage’ EP, which has amassed 40 million streams to date. In 2019, she shared a trio of singles, the emotional “Have Fun at Your Party”, “21st Century Love” – which she performed for Like A Version – and the raw and introspective “Overthink”. Last year, GRAACE dropped the moving “Hard to Say” with I.E., a touching tribute to somebody very close to her heart, who sadly took his own life in 2019. Showcasing her musical dexterity, she then switched things up with the hot and heavy electro-pop number “Body Language” and empowering, unbothered single “You Do You”. Now, GRAACE is sitting on hundreds of unreleased tracks – and she’s just at the beginning of her new era.

Despite racking up more than 100 million streams on Spotify alone, GRAACE says she quantifies her success not through numbers but through the emotional impact her music has on listeners. “If I've touched someone with a song and helped them with words that they're not able to articulate themselves, then I'm content,” she states.

Born in Melbourne, GRAACE relocated with her family to Portland, Oregon when she was 4, before moving back to Australia when she was 11. As a child, GRAACE learned piano and guitar, and it wasn’t long before she was crafting her own songs. Idolising The Cheetah Girls growing up, GRAACE and her two best friends would create costumes and perform renditions in their own band. It was then that a young Grace Pitts realised she wanted to follow the spotlight, as she laughs recalling that, “I was kind of pushy. I was like, ‘I want to be in the front, I want to be the singer!’”

“I always knew that I wanted to do something with music,” GRAACE says. Despite this, a career in music was never something she thought was actually obtainable. “I always thought I would be writing songs forever and playing a lot of pub gigs and weddings.” However, after high school, GRAACE’s covers started to gain traction. Teaming up with a producer friend, the pair tapped into a lo-fi, electronic pop sound that caught the ears of a local radio station. Things soon snowballed and it wasn’t long before GRAACE secured management and Hayden James came calling for that huge collab.

Over a whirlwind three years, GRAACE clocked up shows in Europe (including supports for Tom Walker in Germany), London, Los Angeles and New York. She’s also had sell-out shows in Australia as well as playing a load of festivals including NYE In The Park, By The Bay Festival and Out Of Bounds Festival.

Despite her success, however, GRAACE felt that something wasn’t right. She realised the music wasn’t making her happy, but it wasn’t until COVID struck that she had the chance to reflect. “It forced me to be way more creative. It’s definitely been the best thing that’s happened to me,” she says.

Alongside her new musical direction, GRAACE will also be stepping out with an all-female live band. She’s keen to integrate more of a live sound into her music and more importantly, surround herself with female energy.

After years encircled by male-dominated management teams and tour crews, GRAACE often felt stifled and misdirected. On tour in 2018 as a vocalist with Flight Facilities, she had the time of her life, but craved the presence of other women. “Finally, one of the guy’s girlfriends came on the tour bus and I was just like a leech,” GRAACE remembers. “So now, being in charge and realising that I can create that energy around me while I'm touring, and make my own family of girls, is so exciting.”


Setting an example for other young women is one of GRAACE’s main focuses for her upcoming shows. “Seeing an all-girl band was my favourite thing is the world,” she says. “If I’m able to do that for a few girls that want to jump into music, that’s so sick.”