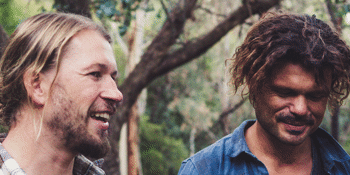 with Tilly VW
Northcote Social Club (Northcote, VIC)
Thursday, 16 December 2021 8:00 pm
85 days away
18 Plus
Music
Acoustic
Send this event to
Two of Australia’s most captivating vocalists, Josh Teskey and Ash Grunwald, come together to cast off the weight of expectation and revel in music’s most simple pleasures.  Releasing their #8 ARIA charting album "Push The Blue Away" last year the pair are proud to announce an exclusive run of shows across Australia.

"Push The Blues Away" was recorded entirely live and straight to tape, with their only percussion consisting of gospel inspired hand claps and stomps, the pair laid down seven original tunes, some penned by Josh, some by Ash, along with two classic Blues covers out now via Ivy League Records.