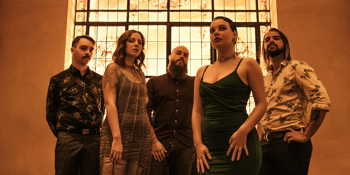 Melbourne five-piece Future Static are set to bring their exhilarating synthesis of alternative, melodic and progressive music to the Northcote Social Club this December in their first headline show since joining forces with charismatic and energetic frontwoman, Amariah Cook. This headline show will see the band perform songs off of their eagerly anticipated debut album, including acclaimed singles Waves and Venenosa. Future Static’s blend of driving riffs, thunderous drums, impassioned lead guitars and virtuosic vocals creates a unique brand of emotional heavy music which is unlike any other. Now one of Australia’s most talked about breakthrough acts, the band’s live show leaves audiences stunned and wanting more.
The band’s debut festival performance at Knight & Day Festival had prominent podcast ‘What We Did On The Weekend’ declaring they were “the highlight of the festival...they were made for the big festival stage”. Future Static further cemented their status with an impressive performance at Unify Forever Festival, following winning the much coveted Triple J Unearthed Unify slot. The group then carried out an extensive national touring regime, including sharing the stage with RedHook, Caligula’s Horse, Pridelands, Bloom, and Stories. Capping off an amazing 2022, Future Static will be joined by special guests Revoid, The Motion Below and Silver Fang.