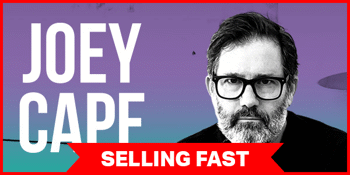 With Special Guests
Northcote Social Club (Northcote, VIC)
Tuesday, 31 January 2023 8:00 pm
53 days away
18 Plus
Punk
Music
Rock
Send this event to
After a few years most of us would like to forget, Joey Cape Announces Acoustic Solo Shows in Australia

Lagwagon frontman Joey Cape has announced he will be performing a swag of intimate acoustic solo shows while he’s on tour with Me First And The Gimme Gimmes in January/February ‘23 in Australia.

Joey wrote and recorded a beautiful record during lockdown called 'A Good Year To Forget’ released via Fat Wreck Chords late 2021. A tug at the heartstrings album that not only expands Cape’s sonic palette, Cape delves deeper than he has before into themes of blistering adversity, loss and grief.

Joey Cape’s solo shows will wax poetic on his own personal tragedies. According to Fat's website, Cape’s album "was written during a year that saw him lose his father, separate from his wife of 20 years, contract COVID and move back in with his parents as a result of a livelihood lost.”

Don’t miss your chance to get raw and real with punk rock legend, Joey Cape. Snap up your tickets now before these shows sell out!